Round Robin Interview with Jackie Gamber and H. David Blalock


If there is another genre that fits in well with horror, it is fantasy.  Many of the elements of fantasy can become horrific given the circumstances of what the characters in the story have to face.  The line between fantasy and horror can easily move depending solely on how you choose to view the story.  Like any good story, regardless of genre, there are times where the tale is too great to be told in a single volume.  As an author, however, the task of creating a solid trilogy can be daunting.  Can the tale really stretch to three volumes?  Will the audience stay enthralled with your characters and your worlds long enough to make it through multiple tales knowing that there is not going to be a quick ending?  Will the story remain fresh even after the first or second book is closed and the next begins?  It takes a talented story teller to pull off this feat.  In my most recent interview, which serves as the first part of a round robin interview that will spread across multiple blogs in the coming weeks, I had the opportunity to talk to two such authors.  Jackie Gamber and H. David Blalock have both managed to weave tales that simply could not be adequately told in a single volume.  Their insight was almost as interesting as their stories.

ROUND ONE JACKIE GAMBER RESPONSES 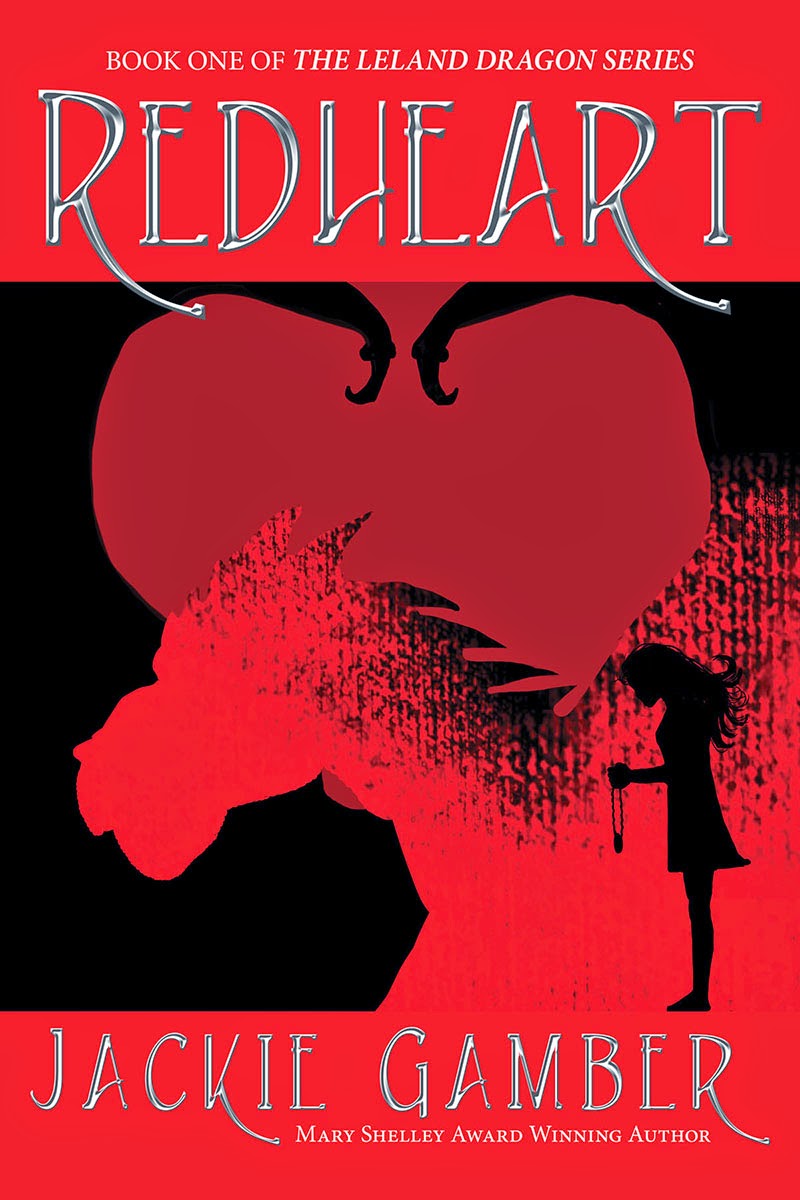 Ira Gansler: What originally drew you to writing?

Jackie Gamber:  For as long as I can remember, I have written stories. In elementary school, I was writing plays and "books" that I would illustrate myself and glue together, and as a teen I had so many of those blank journals filled in with angsty poetry that I ran out of room to keep them all. As an expression, writing has been a part of me, and I can't honestly say what draws me to it; maybe it's similar to how athletes are drawn to compete, and scientists to explore. 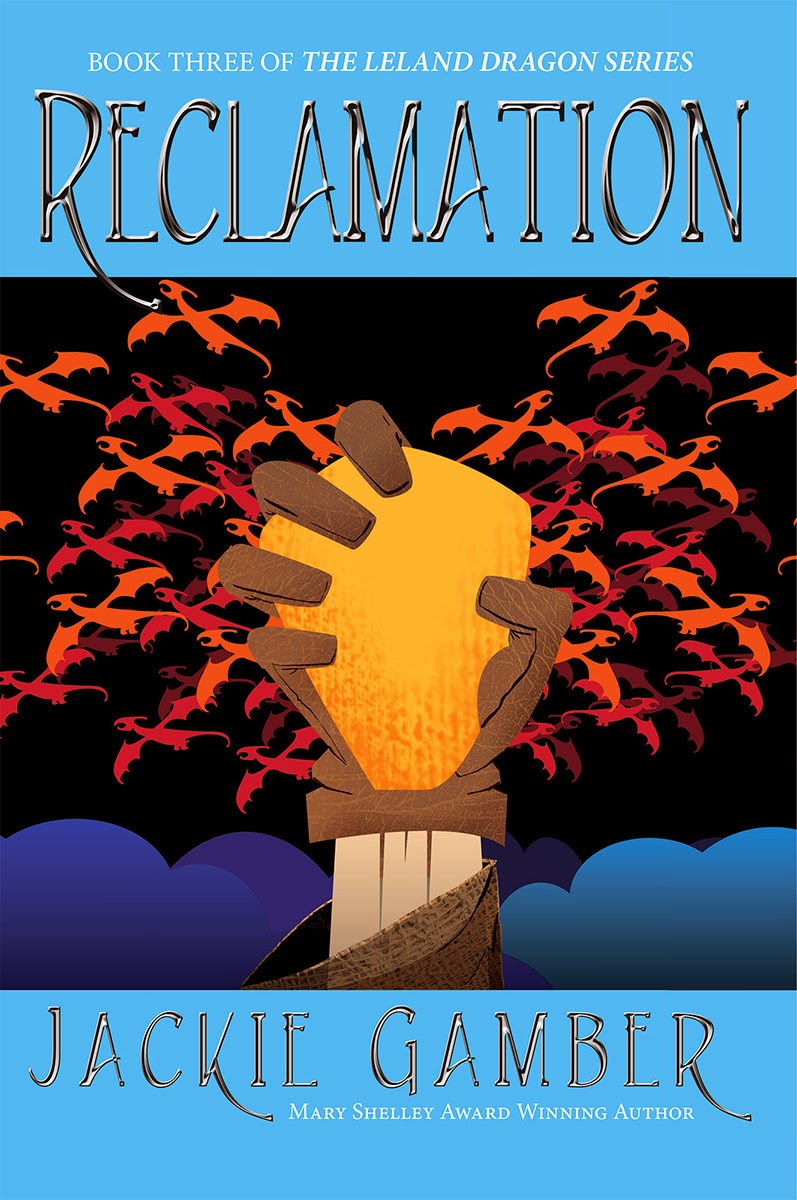 IG: When you first started your respective trilogies, did you plan for them to be a series or was it a result of the developing story?

JG:  My first ideas for "Redheart, Book One" were too vague and tenuous to be anything except a rough concept. Eventually, as I let the world of Leland grow and become a part of the book, the real story kicked in. I thought at first it was a single novel, but came to understand there was more to it than a single generation could tell. 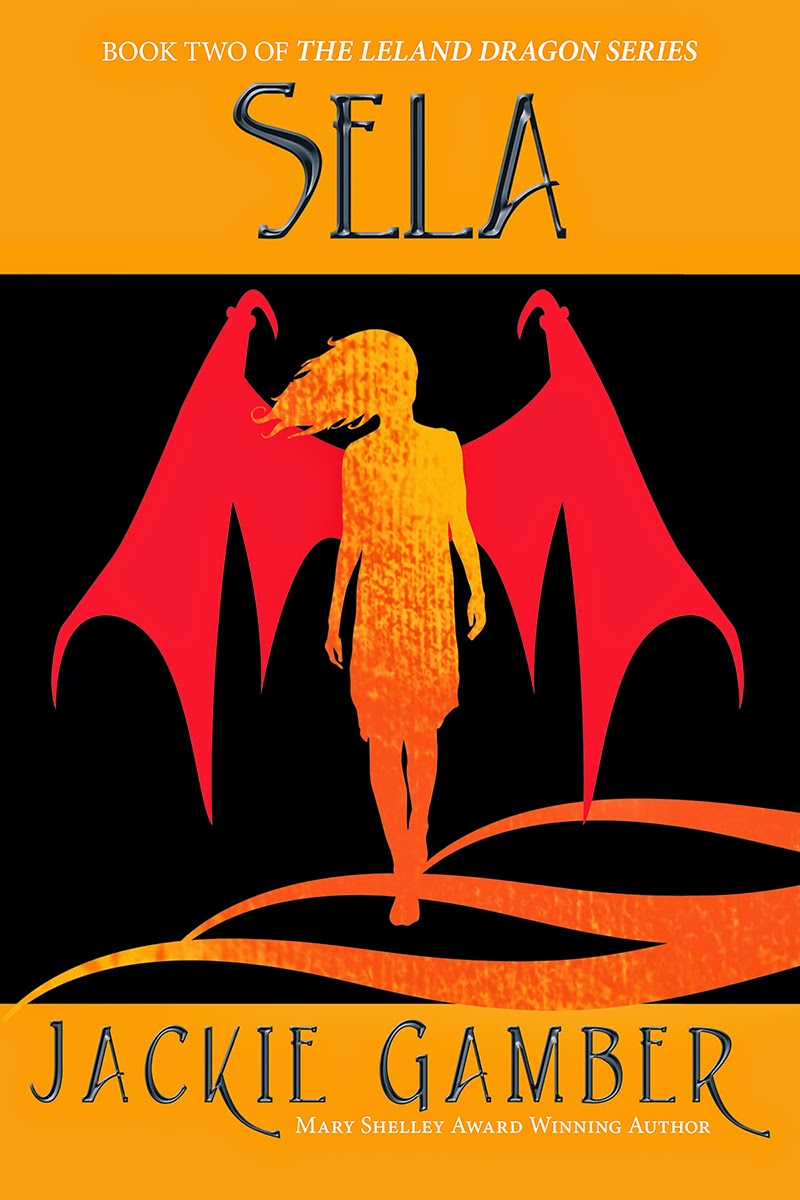 IG: Writing fantasy, what is your secret of making the story real enough for readers to engage and relate while still creating the fantasy elements?

JG:  I'm not sure I have any real secrets to storytelling; for me, it's all about characters. I didn't at first set out to write a fantasy, I had a character who is a dragon. To my dragon, Kallon Redheart, the story isn't a "fantasy", it's his world, and his world is a part of who he is and how he came to be. His story couldn't be told any other way. That's the part I hope readers sense as real: my characters.

IG:  What most inspires your stories?

JG:  My stories come from a place of exploration. The word "why" is a strong motivator for me. In that breathing space between "why would he/she be like that?" and "because", that's where many of my stories develop.
ROUND ONE DAVID BLALOCK RESPONSES 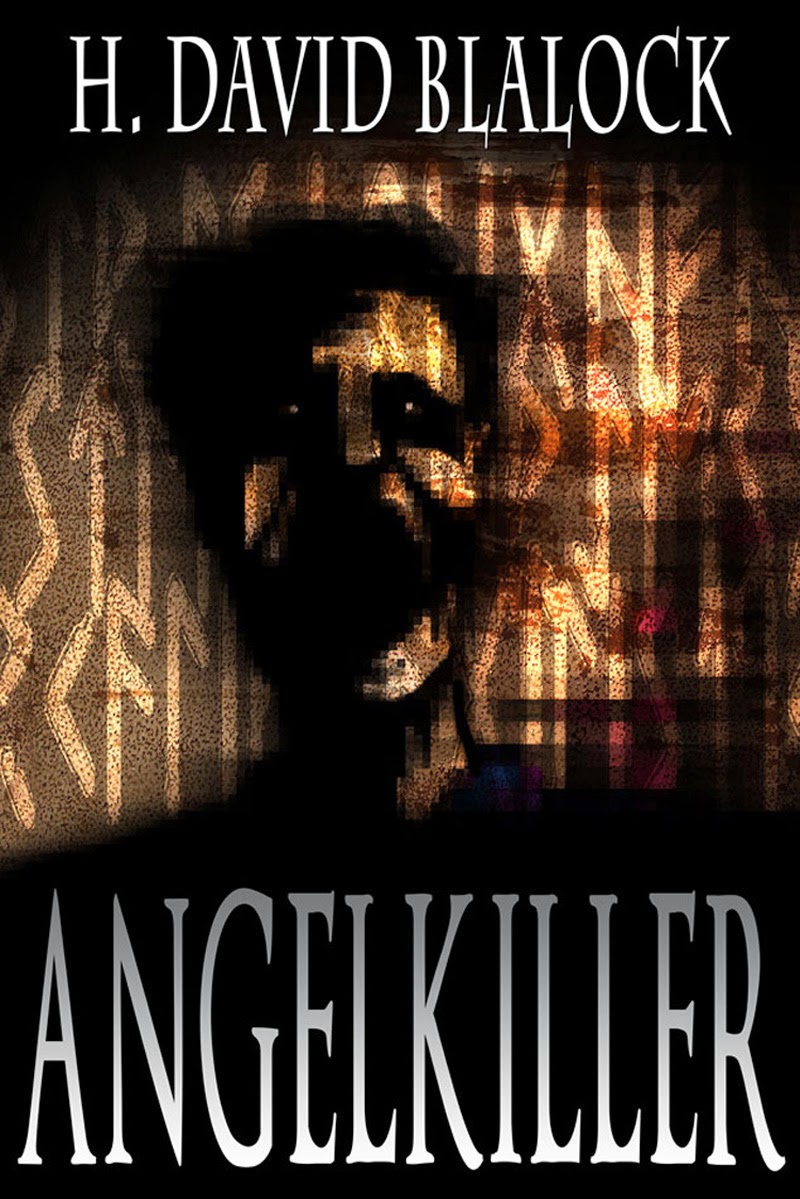 Ira Gansler:  What originally drew you to writing?
David Blalock:  Reading. It's that simple. I was inspired by the writings of people like Heinlein, Bierce, Lovecraft, Bradbury, Clarke... the list goes on and on. I wanted to be able to tell a story as well as they did and determined early on I would do my best to accomplish that. 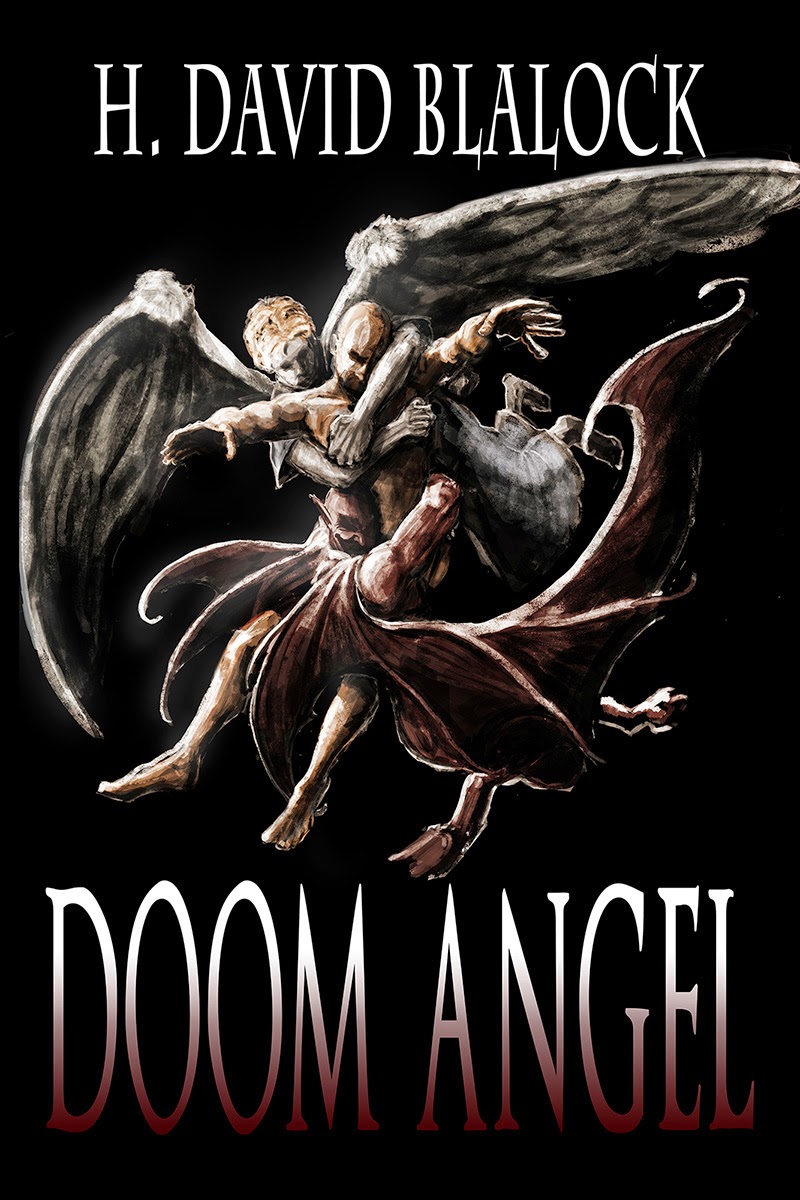 IG:  When you first started your respective trilogies, did you plan for them to be a series or was it a result of the developing story?
DB:  Truth to tell, the Angelkiller Triad was never intended to be a trilogy. I wanted it to be a single volume but the story decided to be a bit more than I expected. It developed into a trilogy of stand-alones. I don't particularly want to write a series. I don't want to leave my readers wondering what happened if I unexpectedly leave this mortal coil. 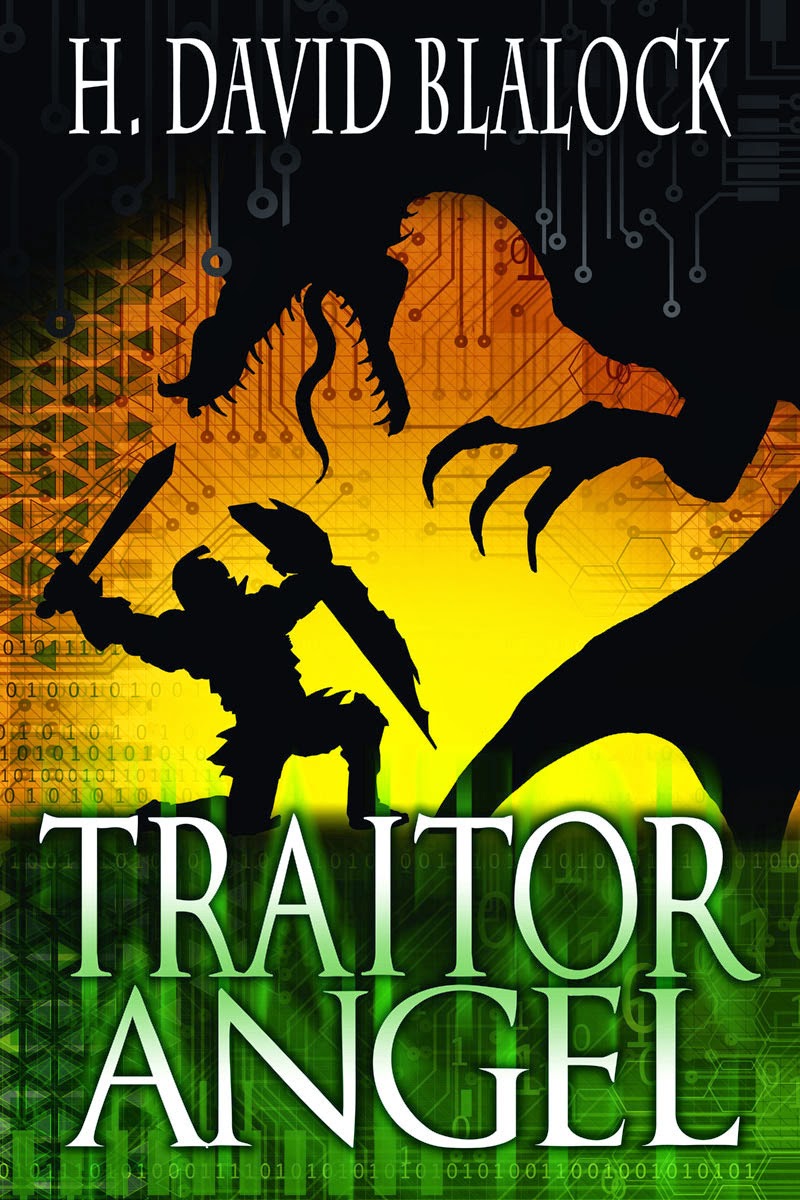 IG:  Writing fantasy, what is your secret of making the story real enough for readers to engage and relate while still creating the fantasy elements?
DB:  Fantasy is reality exaggerated. By taking something mundane and making it grand or stretching its limits, you bring the reader along with you. They believe with you as you believe. If you can't get them to ride along, then you've missed the point of writing fantasy.
IG:  What most inspires your stories?
DB:  I prefer to take the basic questions that confront us daily and turn them around. War? There's a reason for it. Famine? Necessary. Disease? Essential. Then I ask why? From there, the story develops on its own. Sometimes it stops at flash fiction. Sometimes it goes on into novel length. But it finally gives up its answer and with any luck the reader gets to the end and nods, saying "Yep. That's right." Or "I hated the way that ended, but it made sense." I want to have the reader feel what inspired me, to share that inspiration in all its wonder or terror.

Did you enjoy the thoughts and ideas of these two amazing authors?  Are you interested in more?  Follow the rest of the Trilogy tour, including the remaining sections of the round robin interview, as it makes its way across many other blogs.  You can check out the schedule here: 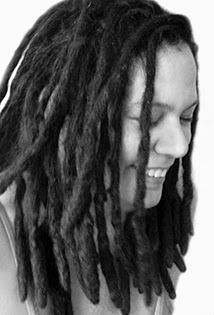 About Jackie Gamber:  As an award winning author, Jackie writes stories ranging from ultra-short to novel-length, varieties of which have appeared in anthologies such as Tales of Fantasy and Dragons Composed, as well as numerous periodical publications, including Orson Scott Card’s Intergalactic Medicine Show, The Binnacle, Mindflights Magazine, Necrotic Tissue, and Shroud. She is the author of the fantasy novel Redheart and Sela, and writing an alternate history time travel novel. She blogs professionally for English Tea Store.com, where she reviews classic science fiction and fantasy novels and pairs them with the ideal tea-sipping companion.

Jackie is a member of the professional organizations Science Fiction Writers of America and Horror Writers Association. She was named honorable mention in L. Ron Hubbard’s Writers of the Future Award, and received a 2008 Darrell Award for best short story by a Mid-South author. She is the winner of the 2009 Mary Wollstonecraft Shelley Award for Imaginative Fiction for her story The Freak Museum, a post-apocalyptic tale that looks closely at perceptions and outward appearances and how they affect the way we see ourselves. Jackie Gamber was co-founder and Executive Editor of Meadowhawk Press, a speculative fiction publisher based in Memphis. One of their novels, Terminal Mind by David Walton, won the Philip K. Dick Memorial Award in 2009. Jackie also edited the award winning benefit anthology, Touched By Wonder. She has been a guest lecturer at Memphis Options High Schools, and is a speaker at writers’ conferences from Michigan to Florida. Jackie is also the visionary behind the MidSouthCon Writers’ Conference, helping writers connect since 2008.

Jackie Gamber’s Redheart Book Synopsis:  Enter the lands of Leland Province, where dragon and human societies have long dwelled side by side. Superstitions rise sharply, as a severe drought strips the land of its bounty, providing fertile ground for the darker ambitions of Fordon Blackclaw, Dragon Council Leader, who seeks to subdue humans or wipe them off the face of the land.

As the shadow of danger creeps across Leland Province, a young dragon named Kallon Redheart, who has turned his back on dragons and humans alike, comes into an unexpected friendship. Riza Diantus is a young woman whose dreams can no longer be contained by the narrow confines of her village, and when she finds herself in peril, Kallon is the only one with the power to save her. Yet to do so means he must confront his past, and embrace a future he stopped believing in.
A tale of friendship, courage, and ultimate destiny, Redheart invites readers to a wondrous journey through the Leland Dragon Series. 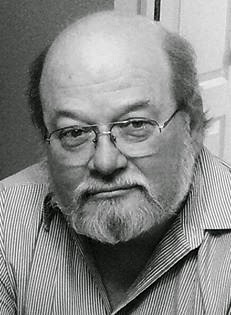 About H. David Blalock:  Born in San Antonio, Texas, David spent the majority of his formative years in Jacksonville, Florida. At the age of 16, his family moved to the Panama Canal Zone where David finished school and entered employment with the Department of Defense as a Powerhouse Electrician.

Hiring into the FAA, he returned with his wife and two daughters to the States and settled briefly in Gulfport, MS. A few years later, he moved to Memphis, TN, as an Air Traffic Controller for the Memphis ARTCC. There he remained until his retirement.

David’s writing has appeared in numerous anthologies, magazines, webzines, and writer’s sites. His work continues to appear on a regular basis through multiple publishing houses.

H, David Blalock’s Angelkiller Book Synopsis: Why do bad things happen to good people? Simple. In the ancient war between the Angels of Light and Darkness, the Dark won. Now it is the job of an undercover force simply known as The Army to rectify that.

Using every tool available, The Army has worked to liberate our world from The Enemy for thousands of years, slowly and painfully lifting Mankind out of the dark. On the front of the great Conflict are the Angelkillers, veterans of the fight with centuries of experience.

Jonah Mason is an Angelkiller, and his cell is targeted as part of plot to unseat a very powerful Minion of The Enemy. Mason and his troop are drawn into a battle that stretches from real-time to virtual reality and back. The Conflict is about to expand into cyberspace, and if Mason is unable to stop it, The Enemy will have gained dominion over yet another realm